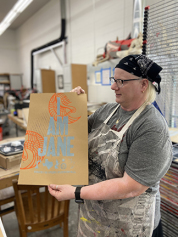 Tricia Earl is an artist, educator, and organizer living in Lubbock, TX., as an independent artist working with photography since 1986. Integrating historical and emerging feminist practices and theories inspire her research. By combining bits and pieces of repressed stories she explores systematic approaches to defining gender identity, culture and social media through researching propaganda, bias, discrimination, and political agendas.

In the early 2000’s, Earl and 13 other women artists came together at One Star Gallery in Lubbock, TX for a collective art installation called “Pulp Fiction”.  The intention of the installation was to create a fictitious yet real “super” woman’s living space. Each artist reflected on what it is in themselves that gives them power to create art and focused on the attributes that they wish they could wear on the outside of themselves but feel restricted to hide or hold close to not be found out as having power. Most of the artist began working within their own medium of choice and then found that they wanted to branch out to other styles that challenged the tradition of fine art. This was the first of many collectives that Earl would draw from to create her own work and collaborate with others.

Since 2005, she has been an active community organizer in both the Lubbock and University communities. She has been instrumental in escalating presentations, lectures, conferences, colloquiums, exhibitions, panel discussions and multiple film series. The primary objective to her coordinating, organizing and planning achievements has been to provide an open forum to enhance critical thinking, promoting social justice.

Honors and awards include recipient of the Ted Jim Dotts Jr. and Betty Shewbert Dotts Ally of the Year Award (2018), Office of LGBTQIA, Texas Tech University, the Inaugural President's Excellence in Gender Equity Award, Staff,  by the Gender Equity Council, Texas Tech University, and the 9th Annual President's Excellence in Diversity& Equity Award, Academic Advisor, Division of Institutional Diversity, Equity, and Community Engagement, Texas Tech University. Her work was featured as the cover art for the Michigan Feminist Studies Journal, "The Future of Feminism". She has presented her research at the National LGBTQ Task Force Conference in Houston, the Diversity Summit at Texas Tech and also at the Feminist Action Project Conference at UT Austin. She has coordinated multiple collaborative group exhibitions including NASTY Women: Lubbock.  She also secured a $6,000 grant from the CH Foundation to complete a documentary for the plainSpeaking series focusing on the Artist of the Llano Estacado. Memberships include the all woman artists collaborative, chiCrits, and a member of the board of SOFA (Supporters of the Fine Arts). Since 1998 she has exhibited her work in group, solo and invitational exhibitions ranging from Texas, Los Angeles, Philadelphia, Wisconsin, Vermont, Virginia and New York.  She was a resident at the Charles Adams Studio Project September 2020 to May 2021.